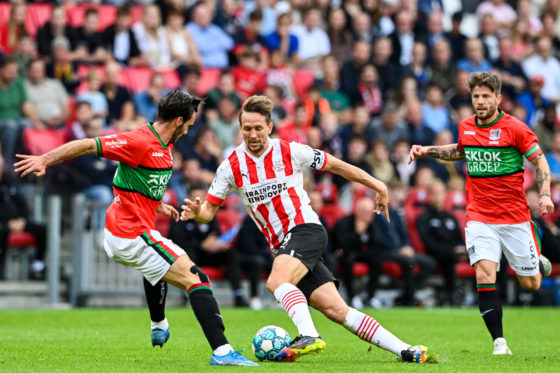 PSV took full advantage of Ajax’s slump with a comfortable 3-0 win over NEC at home to close the gap on the Eredivisie leaders to one point.

Luke de Jong showed nerves of steel to strike a penalty just after half-time, and after a lengthy delay until video referees confirmed a foul on Philip Sandler, English winger Noni Madueke pulled out of injury. set again in the second third before celebrating his comeback.

AZ rises to 3rd place beat lower Volendam 2-1 Despite being reduced to ten men when Dani De Witt was sent off after just 14 minutes for a hard tackle on Robert Mullen.

Six minutes later, Jens Odgard’s shot deflected over Filip Stankovic’s head to give AZ the lead before Tijani Reinders doubled the lead on a counterattack just before half-time. Woldendam’s only reaction after the break was a close-range volley by Henk Biermann.

Twente also remained on the hunt 3 consecutive league titles Against RKC thanks to two goals from Sem Steijn. The 20-year-old made his season tally to four, despite starting only two games due to a spell forced on the sidelines recovering from a concussion.

The Go Ahead Eagles ended with four straight draws. 3-1 victory over Excelsior Emmen then moved points away from Volendam in the bottom. 0-0 draw with northern rivals Groningen.