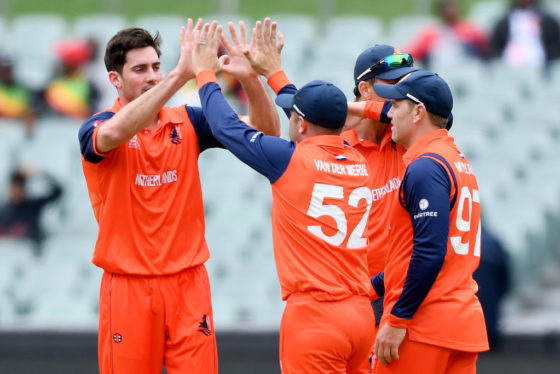 On the back of a collective seam bowling performance and the 11th T20I half-century from Max O’Dowd, the Netherlands took their first Super 12 victory by five wickets over Zimbabwe.

The win is all the more memorable given that it was the first Dutch men’s T20I at the Adelaide Oval and the first against a full-member nation of the year after some close matches in the home summer. became what remains.

Despite a wobble in the second half, the Dutch top order knocked off an under-par target of 118 on 12 balls thanks to a 73-run second-wicket partnership with O’Dowd and former South Australian batsman Tom Cooper. Spare.

Earlier in the day, after Zimbabwe captain Craig Irvine opted to bat first under clear skies, the Dutch pace quartet decided to cut their African counterparts to 20-3 on a power play. Brandon Glover induced a top edge from Ervine and Regis Chakabva put LBW forward.

All-rounder Sikandar Raza took center stage in a one-run victory over Pakistan and continued his excellent form with a 24-ball 40 alongside Sean Williams (28) to revive Zimbabwe’s innings. In the 15th over, one shot proved to be too much for Raza, after hitting three sixes and as many boundaries, he skied one off Bas de Leede (2-14).

A Dutch team that proved unsuccessful in most of its matches, including against Pakistan, sparked Wednesday’s struggle for Zimbabwe: a high dot-ball rate (57%). Faced with a ball.

In response, O’Dowd’s subdued 47-ball 52, featuring 8 and 6 perimeters, laid the foundation for a simple chase. Adelaide in South Australia Having played in his 77 matches at his oval, Cooper made a welcome return to form, playing second his fiddle in 29-ball 32.

The result was a foregone conclusion when Zimbabwe fastballers Richard Ngaraba and Blessing Muzarabani sacked O’Dowd, Scott Edwards and Colin Ackerman in 17 innings pitched. The loss almost ended Zimbabwe’s chances of competing for a semi-final spot.

“It was pretty awkward at first. I was trying to adapt to the wicket as quickly as possible,” said O’Dowd, who is currently the second highest run-scorer in the World Cup, after the match.

“We had a little bit more pace on the wicket today. Obviously there were some tall boys in Zimbabwe and with that extra bounce it took me a little too long to adapt. I adapted well to the bounce and tried to hit it as long as I could.”

The Netherlands will face South Africa in the final match of the tournament on Sunday (2nd November).