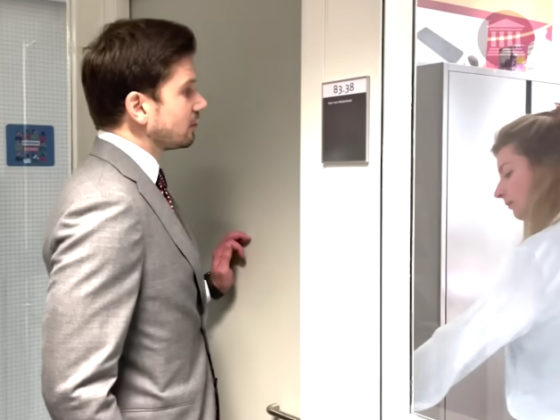 Van Meijeren (l) is shown the door by Ek.Photo: YouTube

The journalists’ union NVJ is considering legal action over how far-right MP Gideon van Meijeren confronted journalists to “expose” them as hostile agents.

Van Meijeren showed up unannounced in the office of Merel Ek, a political reporter for the commercial television channel SBS6, to challenge her for using the word “assassination” during an interview.

When Ek objected to the filming, the Forum voor Democratie (FVD) MP requested that the cameras be removed, but they were not switched off and continued recording the conversation from around the corner.

Van Meijeren has since published the video online, introducing it as the first in a series called “Sewer Mice”. He said this would expose the “gutter journalism” of the Congressional Press Service.

NVJ said Van Meigelen’s behavior was “disturbing and bad in every sense…especially because he was a Member of Parliament and said this was the beginning of the series”.

“He’s basically saying: Journalists, be careful. This kind of behavior undermines the role of journalists,” the union said in a statement.

The video was also heavily criticized by politicians on all fronts, including Prime Minister Mark Rutte, who said the FVD had reached a “new low”.

“In a democracy, journalists must be able to do their job without losing credibility,” Rutte said.

Ex She said she quoted the word “assassination” As an example of how FVD leader Thierry Baudet used words metaphorically after claiming he wasn’t speaking literally when he described Western political leaders as reptiles last week.

“I’m always ready to discuss these things, but the way this was done went too far,” she said.

Van Meijeren replied on Monday in a tweet He claimed that the reaction to his video was a “clearly orchestrated” reaction by “cartel media and politicians”.

https://www.dutchnews.nl/news/2022/10/journalists-union-may-take-fvd-to-court-over-sewer-rats-video/ Union of journalists could take FVD to court over ‘sewage rat’ video